I love Quicken’s functionality, and it’s been an integral part of managing my money since high school, if you can believe it. But it has its shortcomings–the most glaring of which for me was the budget module, which is why I used YNAB side-by-side with Quicken for the last few years.

A few months ago, we decided to simplify things a bit and moved all of our data to YNAB. I’m a big fan of simplicity wherever possible, and a streamlined system that focused on a single program was the right way to go.

(If you’re interested in buying YNAB, make sure you use this coupon code for $6 off your purchase.)

Here’s an overview of the various functions I use in Quicken and how I moved them into YNAB:

The ability to track income and expenses over time is fundamental to understanding where my money goes, as well as to provide a historical record of transactions for future reference.

YNAB takes care of entering transactions without a problem, and its reporting module is accurate, intuitive and graphically stunning–important qualities for a system that I have to use on an ongoing basis and that I have to share with others in the family. 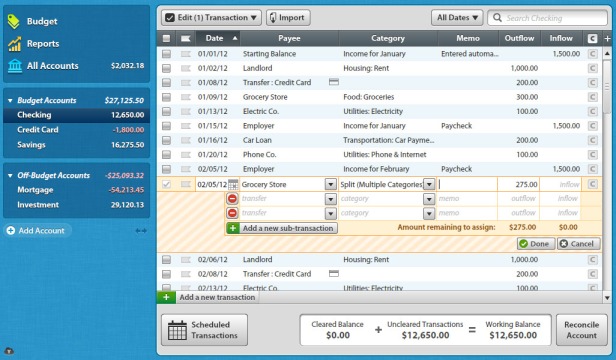 There are only a handful of reports available in YNAB, but they are the important ones: spending (by category and payee, spending trends, income vs expenses, and net worth).

I believe that measuring net worth over time is one of the keys to building real, lasting wealth. You have to understand where you stand today and whether you are making progress month-to-month and year-to-year.

Thankfully, the ability to track “on-budget” and “off-budget” accounts in YNAB allowed me to move everything over–including balances for investment accounts, real estate, loans, etc.

The only downside with YNAB is that I need to update the balances for most of these accounts manually, which I like to do at the end of every month. With Quicken, most of this was handled automatically with the exception of real estate and vehicle values.

As much as it pains me to do away with automation, I like the fact that I need to check in with all my loan, investment, and other asset accounts at least monthly. It’s a good timeframe for doing things like scheduling payments, monitoring investments, and spotting potential problems.

Obviously, the biggest advantage in moving to a budget-based software is the budget module. Everything in YNAB starts and stops with the budget, which is far from how Quicken handles the budget screen.

While Quicken made big strides in recent releases to adapt to a more envelope-based approach, the fact that tracking in Quicken is so precise makes it difficult to keep a simple budget. For example, when you make a loan payment on your car, Quicken tracks part of it as a transfer to your car loan account, and part of it as an interest expense. This is great for reporting, but it makes the budget screen a pain to navigate. I feel much more at home with YNAB.

A lot of businesses would not be able to move into YNAB, but if you already use something as relatively simple as Quicken, chances are good that YNAB could be a good fit for you. I’ll write about how I moved by business finances to YNAB next week and link to it from here.

One glaring shortfall with YNAB is its lack of monitoring tools for investments, something that Quicken built into its system many years ago. I personally don’t miss it that much though, because anything that I needed Quicken to do with investments, I was already accomplishing using Schwab or Vanguard’s interface.

Adding my investment accounts in Quicken was done purely for net worth tracking purposes, which I can do just as well in YNAB.

Onto bill reminders…another Quicken feature that I made very heavy use of to make absolutely sure I never missed a bill.

While YNAB doesn’t have something that corresponds directly to this, I’ve learned to make use of their “scheduled transactions” feature to keep track of bills. I simply schedule bill payments for the date I want to make the payment (not the date it’s actually due), and this ensures that I will see it as I go through my upcoming transactions every week or sometimes more often.

The one nice thing about Quicken is that I can hit a single button and have all of my accounts updated automatically, and all at once. With YNAB, imports are handled by downloading a Quicken-based file from your bank’s website and then importing it into YNAB. 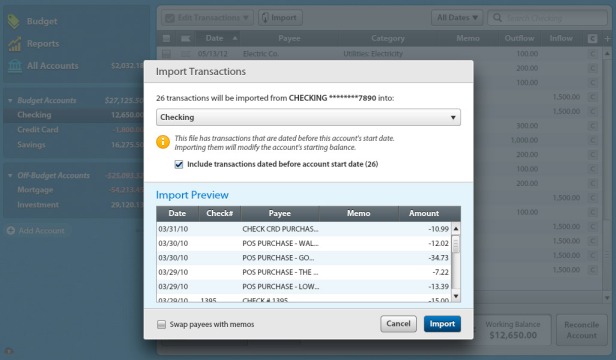 With the release of the free mobile app, I have found that imports are very rarely necessary in YNAB, as long as I continue to track expenses at the point of sale (a.k.a. as I’m leaving the register). With all automatic bills also scheduled in YNAB, my YNAB balance almost always reflects the bank balance accurately.

Quicken released its mobile app around the same time that YNAB released theirs, so both are fairly recent. However, I’ve found Quicken’s app to be somewhat buggy, and enjoyed the simplicity of YNAB’s app to the point where I was willing to pay for it (before it was free!).

The mobile app allows me to view my account balances, current budget, and to enter transactions on the go. Most recently, they finally added the ability to split transactions on the app, which was a big missing component in fully adopting YNAB on my mobile device.

In making the move, I was sure to completely save and archive my Quicken data in case I need to refer to it later, rather than trying to go through a complicated and pointless import into YNAB. I started “fresh” with my current bank balances and a fresh budget, ready to look forward rather than back.

Over the last few months, I’ve found myself spending less time doing overall tracking and financial management, while our financial well-being is moving up at a faster pace than ever before. Win-win!

If you’re on the fence about moving everything to YNAB, I encourage you to try it cold turkey. I attempted the switch three times, and always wound up going back to Quicken. It wasn’t until I committed to switching everything completely, and took the time to learn YNAB inside and out that I was finally able to reap the benefits of a complete switch.

Don’t forget–you can still get 6 bucks off YNAB if you use my coupon code. It’s a win-win for both of us, as I’ll get 6 bucks as well for referring you!