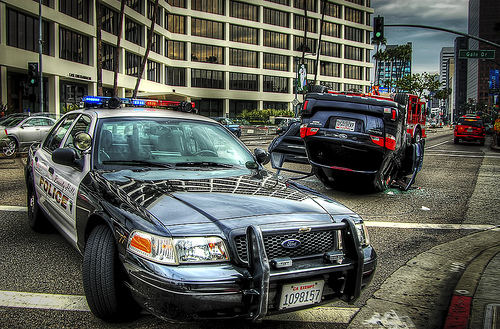 If you ever have to deal with a car accident that involves actual or potential injury, this might help.

About three months ago, my wife was involved in a car accident, and she was about six months pregnant at the time (we are expecting in just a few days). She was stopped at a red light when someone hit her from behind and caused some minor body damage to our car and no evident injury to my wife.

We filed a car accident insurance claim with Esurance (get a free quote) (you might recall that we switched earlier this year), and the claim was essentially forwarded to the other driver’s insurance for payment.

The car repair claim was well on its way to being resolved within hours. In the meantime, a routine call to the doctor to seek advice about the accident turned into a request to have us come in for a wellness check on Mom and the baby. When the insurance company caught wind of this, they immediately opened a bodily injury claim for us and told us they would leave it open indefinitely.

Thankfully, there was nothing wrong with either Mom or the baby that was apparent from the doctor’s visits. We decided that we would leave the claim open until she gave birth anyway in the off chance that something happened, however remote.

Curiously, within a week of the accident, we had a settlement letter in our mailbox from the other driver’s insurance company. I had never seen one before, so it took some looking around the Web before I understood what it was and why we were being offered money.

In its essence, the settlement awards us a few bucks (nothing to sneeze at–about the equivalent of 2 weeks of pay) for the promise of settling the matter and not suing the involved parties in the future. Since there’s no apparent medical claim, the insurance company is presumably only worried about future pain & suffering claims for the “inconvenience” or stress of dealing with the accident.

Settlements, in the car insurance as well as health insurance and other industries are based on some magic formula that the insurance company has put together which determines (among other things) the probability of something going to court, their potential financial liability if they lose the case, and how likely you are to be willing to settle for a certain amount.

As I’m discovering, the truth is that very few things actually go to court in any kind of insurance case because the insurance companies are unwilling to spend the money and risk losing the case. People are awarded (many times, unfairly) huge sums of money every day, even in cases where something they did resulted in the problem.

What should you do if you’re offered a settlement for something? Even when a small sum is involved, seeking the advice of a lawyer trained in these cases is a good idea, although you should be clear on how far you’re willing to go to push your case. In my opinion, there are ethical considerations involved when you pursue money you’re not really entitled to (or too much of it), and karma really does come around.

Of course, there are also instances where you really do need the money to cover medical bills, lost time at work, or future problems related to your injury, and you should do everything in your power to make sure you get what you deserve.

As for us, we’re going to wait until our son is born and everything checks out before we close out this case for good.

Any readers willing to share their experience with settling claims? Visit the comments.

One thought on “Settling a Bodily Injury Claim”